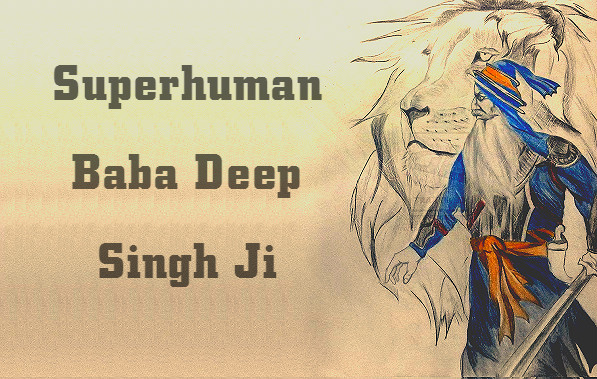 Baba Deep Singh Ji’s parents were very hard working farmers in Amritsar, India. They always wish to have one child but had not been blessed with any for 20 years.
A Sikh saint told them to not be disheartened, one day a special child will be born in your home and you should name him Deep (meaning one who gives light). Baba Deep Singh Ji was born to them on January 26, 1682.

When Baba Deep Singh Ji was 12 years old, he traveled to Anandpur Sahib with his parents to meet Guru Gobind Singh Ji (Tenth Sikh Guru). From there onwards, the journey of Baba Deep Singh Ji started and he is remembered for his loyalties to the teachings of the Sikh Guru’s and sacrificed his life to serve an example for all Sikhs onhow to live and die with Dignity and Glory.

2. Baba Deep Singh Ji was a master of many languages including Gurumukhi, Sanskrit, Persian, Arabic and several other languages. While at Anandpur Sahib, he immersed himself in his studies of Sikh philosophy and the Sri Guru Granth Sahib, the Sikh holy book of scriptures. It is difficult for us to master a single language even though we learn it from childhood.

3. Guru Gobind Singh Ji also taught him the art of horsemanship, hunting, arms training and the use of the bow (archery) and other weapons. At the age of 20, he becomes the bravest warrior. Even today, his life serves as an example for each one of us on how to live.

5. Baba Deep Singh Ji fight Beheaded. In the second engagement with Jahan Khan Forces near the village of Goharwal, Baba Deep Singh Ji and all the Sikhs fought with great valor and courage that the enemy was almost defeated but soon after large army of reinforcements arrived for Jahan Khan’s men but Baba Ji and Sikhs continue fighting and advanced towards Amritsar.

During the clash, both Jahan Khan and Baba Ji swung their weapons with great force, leaving both of their heads separated from their bodies. One of the Sikh reminded him of the vowed to die in the precincts of the Golden Temple. He kept his promise by continuing after picking up his head and carrying it on his palm, whilst continuing to fight, reached the periphery of Harimander Sahib where he breathed his last.

He is also known as Anokhe Amar Shaheed Baba Deep Singh ji. Only someonewith spiritual strength could accomplish such a task.